Kids Who Perform Are Quick Thinkers

Whether you’re a kid or an adult, the ability to stay calm and carry on is what keeps a small blooper from mushrooming into a major one. “When something goes wrong during a show, kids learn to improvise,” says Brian Olkowski, a 4th- and 5th- grade teacher in San Ramon, CA, and director of the school’s drama club. “One of the best things kids discover is how to think on their feet.” No performance is ever perfect, says Olkowski, so the real skill is learning to minimize errors and get back on track. “When someone flubs a line, the other kids learn how to cover for him,” he says. “I tell them it’s not about never making a mistake; it’s about never letting the audience see your mistake. Those are great skills that transfer to the classroom setting as well, whether it’s giving a presentation in front of peers or being called on to answer questions.”

Still, it helps to prepare your child for the possibility of problems cropping up, says Lisa Lollar, Psy.D., a psychologist in Denver, CO, who works with performing artists. “Talk about what she might do if she drops her music or forgets a line,” says Lollar. “Working through the scenarios in advance and coming up with a solution will help her feel prepared if something surprising happens.” The ability to expect the unexpected — and then roll with it — will give your child confidence any time she tests new waters. Lollar adds: “If you help your child define success as being willing to try something new, the idea of messing up isn’t so scary.”

They Master Their Anxiety

Let’s face it: Even grown-ups get nervous when we have to speak in front of our colleagues or give a presentation to the boss. Learning from an early age how to cope with performance jitters gives kids a leg up in those big life moments. “The first step for a parent is to normalize a child’s feelings of anxiety,” says Lollar. “Tell them, ‘You know, a lot of kids — and even adults — feel nervous before a performance. It’s completely natural.’” It won’t take away the nerves, but it will let your child know there’s nothing wrong with feeling this way.

Then before the big show, talk your child through his worries by reminding him of other moments when he’s felt anxious, even when things turned out well. “Remind him of the baseball game when he felt really nervous at the plate, but managed to get a great hit,” suggests Lollar. “Recalling past experiences with positive outcomes gives a child confidence.” Other tricks: Help your child calm his body in the minutes before the performance begins by taking four or five long, deep breaths or counting backward from seven. Both force his mind to focus on something other than his nerves.

Once the show is over, let your child bask in his accomplishment, then casually comment on how well everything went. He will carry this experience with him for the next time, as more evidence that he can successfully perform under pressure.

One of the wonderful things about being in a play is that for a short period of time, you get to become someone else. For a child who struggles to talk about her feelings, there is a tremendous relief in disappearing behind a character and using it as an intermediary through which to open up. “It is a very safe way for kids to try out certain feelings — and take ownership of them — while playing the role of someone else,” says Olkowski, who also runs a summer theater program for children. “I’ve worked with shy kids who are able to blossom on stage and express themselves in a way they aren’t comfortable doing around their peers.”

Playing the role of someone else also teaches kids about empathy. “They learn to put themselves in someone else’s shoes,” says Jessica Hoffman Davis, author of Why Our Schools Need the Arts. “In performing the part of someone else, they learn what it’s like to think like that other person.”

Parents can also use a child’s theater performance to open a dialogue about sensitive issues. “Take the experience of a character in the play and tie it to your child’s situation,” says Lollar. “If your child is nervous about her first day of school, it helps to say, ‘Remember when you were in that play, and the character Lucy was scared? How did she handle it? What was she feeling? Did it work out OK for her?’ Drawing parallels to the character’s situation and her own will make your child more comfortable talking about her feelings.”

For kids who aren’t into acting, dance can offer another way to explore their interior world, says Annie Spell, Ph.D., a child psychologist in Lafayette, LA, and co-creator of Leap ’N Learn for the Classroom, a movement program for kids. “Dance teaches kids to think in a totally different way. You take the physiological experience of an emotion and assign it a corresponding movement instead of a word. It can be a powerful tool for kids who have trouble expressing themselves.”

In as much as performing arts inspires our creative natures, it is also a confidence builder. After all, once we've created an expressive project we must still perform it or present it to an audience. This takes the courage to accept whatever reactions come from sharing this part of ourselves without sacrificing our integrity.

Confidence is the result of our knowing that other's opinions of us don't need to become our reality.

Essentially we're nervous because we don't know what the response will be to our efforts. However, somewhere deep down we want it to be validating to us. As a result, we find ourselves imagining the horrific feelings we would experience if it was any less than that.

Part of building confidence in performing arts is being able to let go of such expectations. We carry forward with our vision knowing it is the best representation of our inner creativity we can give at that moment. It is not wrong or right, perfect or imperfect—it simply is.

In performing arts settings, people will have varied opinions about someone else's expressions. Some of it will be positive and some negative. This is a mindset we can apply to many areas of our lives.

By their very nature, the performing arts are deeply collaborative. They are about forging connections through sharing common interests and goals with others. They are also about building trust with those we choose to work with on projects that are meaningful to us. With such experiences, we learn to weather challenges and disagreements constructively and proactively.

Producing anything in the field of performing arts, whether academically or professionally, usually requires us to call on the help of others.

Very rarely can we do it all on our own, and it's not just a case of "many hands making light work." It also has to do with enhancing our results with the expertise and insights of others to achieve beneficial engagement and mutual success. This can be true of any kind of team project.

In a group of like-minded individuals, each person may have something they can bring to the table that no one else can. For example, Henry Ford claimed he surrounded himself with people he knew were smarter and more capable than he was. That kind of collaborative willingness allowed him to invent something that eventually transformed the world.

Performers See the World in a Whole New Way

At the end of the day, the transferable skills a child learns from performing may not be nearly as important as the experience of performing itself. “We’re always looking for ways the arts can benefit kids in other areas of life,” says Davis. “It’s as if art for art’s sake isn’t worth our time, when in fact, it gives kids an awareness about themselves and creative skills they’d never learn otherwise.” She may never apply the improvisation skills she learned during the school play to a math equation or turn her teamwork with other dancers into leadership on the school playground. But simply by having been part of the performance process, your child has been exposed to a new way of thinking and doing. And that alone is a success to be proud of.

During their school years, students will be assessed and graded constantly, and part of any mindful assessment is providing constructive and actionable feedback students can grow from. Performing arts work always involves feedback. Students can learn through artistic practices that feedback can be empowering if both given and received the right way.

Whether feedback is positive or negative, students must learn how to use it to their advantage.

Performing arts is one of the best avenues for them to learn this since such projects are so deeply personal and unique to each student. If the feedback is constructive, they must be guided towards how to use the best of it to improve. If it's largely negative, they must learn to turn it around into something that can serve them rather than break them down.

At LifeLight Youth Theatre we ensure that the feedback given, even in a creative setting like performing arts, is both useful and enabling.
In this way, students learn about useful failure.

Instead of losing patience with themselves and giving up, they return to the task determined to put an even better effort forward to achieve their goals. Outside of performing arts, this skill can serve them well.

How the Performing Arts Benefit Kids

Kids who perform gain skills that extend far beyond the standing ovation.


It’s no big secret that getting kids involved in the performing arts can have major payoffs in school. After all, research shows that children who sing/dance/act/play their little hearts out are four times more likely to be recognized for academic achievement compared with their non-performing friends — and they tend to have enhanced cognitive, motor, and social development to boot. But the benefits don’t end there. Getting up on stage can enrich your child’s life in all sorts of surprising ways. 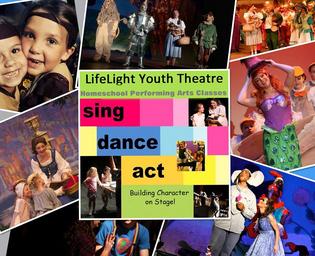